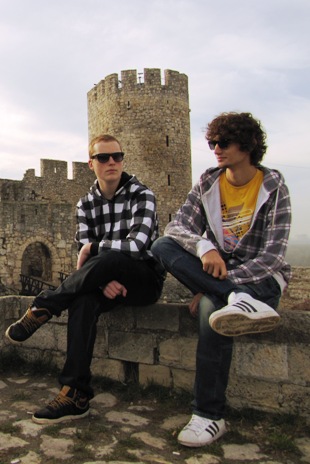 Senores Funkees is an duo consisted of Marko Djukic and Nikola Mijuskovic. They are young DJ's and producers from Serbia, Belgrade. They are into electronic music for over a two years. They had started with a psychodelic music, but now they are more interested in house, techno, chill out, deep house, and similar. They are part of a Kilamandzaro org. and they are resident DJ's at the few clubs in Belgrade.

Marko Djukic, Junior Senor Funkee was born on january the 19th, 1993, Serbia. As for many kids, first interest in music appears at early age, at the middle of elementary school. At the time, old school-rap and comercial house was his favorite music. As he grow older, reggae, 80's pop-rock, house (and other types of electronic music) became dominant in his taste. After choosing finest directions from mainstream and focusing more on electronic, idea of being a dj/producer wasn't just an unserious dream of an teenager. Being as such, a duo was formed in 2009. He and his best friend Nikola started making their first moves with psychodelic music, doing with, at the time, primitive tools and samples in Fruity Loops. Soon, they gave name to their duo-Mind Break, and joined with friends from Beat Maniacs formed music organisation called "Kilamandzaro org.", that played mainstream psy music in several Belgrade clubs. As their producing skills got better, Marko and Nikola soon focused more on less agressive beats, such as chillout, jackin'/chicago house, tech house and funk music of the 70's and 80's. Realising that for them, more inspiration lies in that directions of electronic music, duo changed name in "Senores Funkees."

Nikola Mijuskovic, Senior Senor Funkee was born 02.06.1992 in Belgrade, Serbia .When he was 9 years old he wanted to play guitar like his older brother, or even like Jimmy Hendrix. After several years in elementary music school, he entered in the electronic world with Internet and Counter Strike's. As an important member of his graffiti crew, he begins work on the program Fruity Loops and then makes his first hip-hop beats. His direction turns toward psychedelic first, there is a project,''MindBreakwith his best friend Marko. During this period, Nikola and Marko with friends from Beat Maniacs and some other friends, driven by a story about independent Kilamandzaro Organization, and range from performances in Belgrade clubs. Marko and Nikola continued interest directed to the house, techno, chill out with influence of funk music 70's and acid rock. That is how their next project begin ,,Senores Funkees'' . After a few singles they sign a contract with German record company, Chibar Records'' , and they first EP coming out titled ,,Happy Funk Year''.