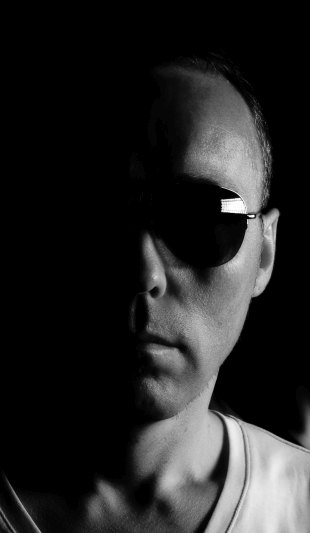 Frank Bauduin started his DJ career as "Peak" in 1988 at a youth hostel in Germany were he played on several occasions. Back then he was interested in the upcoming New Beat & the old electronic New Wave school, especially by artists like Front 242, Fad Gadget & The Neon Judgment. He later on moved to Ostend / Belgium where he played at several house parties in small local clubs on a regular base. After a period of 4 years, playing the more commercial anthems & seeing that commercialism was taking over, he decided to take a break from the DJ-ing scene. He picked up DJ'ing again in 1995 & started to play techno. From then on his DJ-career got a boost. He started in organizing local Techno-parties and invited the more ‘known’ DJ’s in the Belgian Techno scene. Since then he has been booked on several occasions both within Belgium as abroad. He shared turntables with DJ’s as ; Carl Cox, Claude Young, Umek, Ben Sims, Jay Denham, Cari Lekebusch, Speedy J., Gaetano Parisio, James Ruskin, Rino Cerrone, Danilo Vigorito, Woody McBride, Adam Jay, Henrik B, Damon Wild, W.J. Henze, Stanny Franssen, Dean Rodell, Sheela, Patrik Skoog, Marco Bailey, Redhead & many others.

In February 2002 he started a concept of his own. Phuzionz was born. The idea was to get 2 styles in 2 rooms at 1 location. Phuzionz seemed to be the logical concept name, the styles he combined were Techno & Drum ‘n’ Bass. Under the motto ; ‘2 stylez, 2 roomz, 1 location’ he organised this project completely by himself. The next Logical thing to do was to produce some own tracks, therefore he teamed up with Radical G. They released on Dedkob, Subsounds, Kroma & last but not least GENETIC. Peak played @ I LOVE TECHNO – 2004 for Studio Brussels ‘Switch – discover the DJ’. How better to top off the year than playing @ one of Europe’s biggest indoor techno festival. Since 2007 he got more interested in the minimal stream and is working on releases.