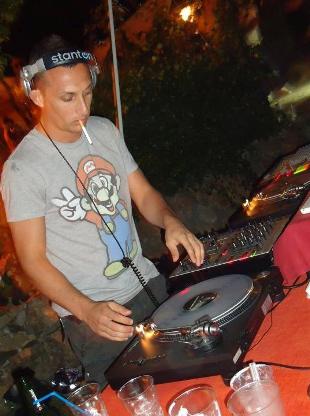 Dario Ruzzier art Adio Dj/producer born in Leghorn on 15/09/1985 lives in Rome. Start bareknuckle electronic music around the age of 18, only in 2003 began playing. In 2005 the first experiences in the small club of Leghorn Calafuria and Kodak. In the following years he performed in various clubs in the city of Pisa and Florence. In 2007 arrives in Ibiza and immediately begins to approach to small local console. In 2008 he becomes resident of after hours Montana his productions are minimalist techno electronic result of in-depth studies on cinema. the productions are marked particularly by voice and sounds typically Asian and Arabic, although the biggest influence comes from electronics. In 2009, his first release on German label Toy Bag Franz-Franz Tanz Tanzalbum. Under the name Bazgria, Dario Ruzzier VS. Emanuele Bellia, various artist and consists of illustrious names such as thistle, Marco Dassi, Seismal D, Samuel Brunei. In 2011, has a new series of collaborations with DJ Luca Marchettini art Mark Hettings.